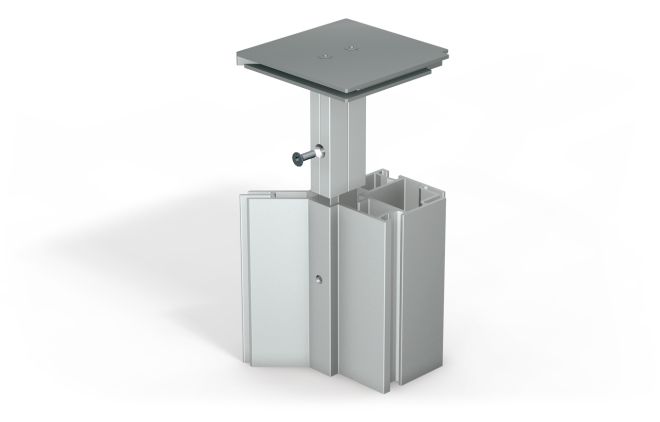 Agam has created the FH7690 extrusion used in conjunction with the FH7690 End Plate.

As a designer at Agam, I am continually presented with exciting challenges which enable me to apply my skills and explore my abilities in order to create the best new products for our customers. Recently at Agam, we have received numerous requests for designs requiring the use of SEG (silicone edge graphics) to turn corners while also being structural enough to create especially large tradeshow booths and displays.  For this purpose we have created a new extrusion: the FH7690 used in conjunction with the FH7690 End Plate. Through design iteration and prototyping we were able to create a system which meets all the prerequisites of our clients.

When I was designing the end cap for this system the key challenge was to create a product that served several functions but was also easy to use.  Another important factor would be its ability to disappear behind our clients’ graphics; by being unobtrusive it would not burden the design of our clients’ displays.

Once I was content with my final prototype, I had to deal with the nuances of full-scale production. Its manufacturing process begins with our Laser Cutting Center, where it cuts aluminum plates of two different thicknesses in order to achieve perfect fitment for our SEG Gasket. These aluminum plates are then inspected and assembled using countersunk screws intended for a flush surface.  These screws are also used to fasten the plates to a custom insert block which can be secured to the new FH7690 extrusion. The finished FH7690 End Plate is then sent through our powder coating oven for a durable painted finish.

Watching the above YouTube video will visually explain how to assemble an FH7690 cube featuring the FH7690 extrusion, FH762 extrusion and FH7690 End Plate.  It reviews the components needed and the steps taken to create a cube.  It even shows how fabric is inserted into the channels and also shows some design ideas.

When constructing a display or tradeshow booth, the FH7690 End Plate is installed into the top and bottom of the FH7690 vertical extrusion posts using a countersunk screw inserted into its custom insert block.  After this, the FH762 horizontal extrusions can be connected to the FH7690 verticals by tightening their CBX connectors with a hex key. The result is an end plate that not only covers the ends of the FH7690, but also acts as a symmetrical point of convergence for 8 different fabric channels. This creates continuous channels in which SEG Fabric can be inserted, allowing designers to create seamless fabric cubes without having to “jump” fabric around inside and outside corners.

In addition to fabric cubes, this new FH7690 End Plate can be used to create entire rooms of seamless SEG fabric due to its inside corner fabric channels.